We bet you didn’t know that Vikings were pirates too! In the 5th century, Vikings started a new epidemic of piracy when they attacked the island of Lindisfarm. People were panicking; who were these attackers, and where were they coming from? Well Vikings were kind of the original pirates. 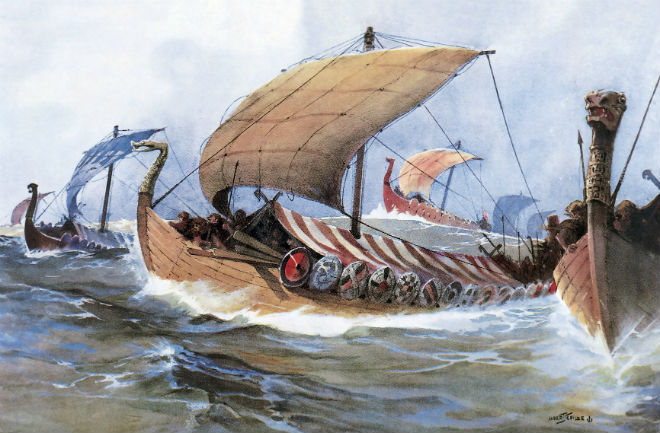 The Vikings came from harsh, frigid countries like Sweden, Finland, Norway and Denmark which meant that they were not only used to the cold, but they were consummate sailors and shipbuilders too! They were used to navigating the fjords and inlets of these countries and were ruthless too.

Vikings believed not in one God, but in a pantheon of Gods that are especially interested in the art of warfare and the honour of the battlefield. This is why they believed that men and women who fought well and died in battle would be rewarded with a life of revelry in Valhalla.

Viking Equipment
Vikings made many ships, but are mostly known for the long-ships, or Drekis (dragon ships), which were long, narrow, shallow-draft boats which have high, curved sterns. The figureheads, usually animal heads, that were placed on the stem of the stern were removable and were intended to protect them from the dangers of the sea. This is the origin of the modern figureheads that were in place in the Golden Age of piracy. When Vikings went on a voyage they were allowed to bring one wooden chest, which served as a seat while they were rowing, and their shield which would be fastened to the ship’s railings.

What Made Vikings good pirates and Warriors?
Vikings were adept with most weapons, but tended to favour large broadswords or axes when on land. These were capable of cutting through wood, leather, flesh and bone quite easily. In fact they could kill a man with one stroke if the man or women wielding it was strong and skilled enough. For boarding ships, however, they were more likely to use slightly smaller axes which were more effective in close quarters. They could use spears and bows too, though. Their weapons could be plain, or engraved depending upon their status within the community.

Our tendency to glamorize the antics of pirates goes well beyond our love of Johnny Depp and the Pirates of the Caribbean movie adventure,…