So you think you know what there is to know about pirates? Well here are some top pirate facts that you might or might not have heard. If you think we’ve missed an important pirate fact, add a comment at the end of the post in the comment box! 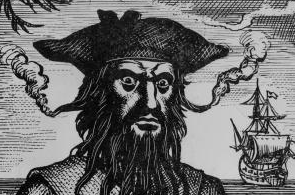 1 – An interesting pirate fact to note is that pirates ran their ships under a democratic system that involved voting on such things as where the ship would sail and what would be their next mission.

2 – If a pirate ship was in danger of being captured, pirate captains would change into old clothes so they would blend in with the other crew members and have a chance of escaping.

3 – The Jolly Roger Flag, with its skull and crossbones, was not the only flag used by pirates but was the most effective in scaring people into surrender without a battle. Many pirates simply used a black flag. The Jolly Roger flag was mostly flown when sailing around the Caribbean during the times of the Spanish conquest.

4 – A strategic pirate fact is that pirates would only generally attack one ship at a time; therefore, if a ship was planning to sail alone, it would often follow the course of other warships of convoys to make it less of a target for pirates.

5 – A common pirate fact for all sailors; whistling on a ship is thought to bring bad fortune, especially if you whistle into the wind, which is said to be a challenge to the sound of the wind.

6 – Women on board a pirate ship were also thought to bring bad luck, or at the very least fighting among men. While this seems to be true of most pirate ships, there were many, including Blackbeard’s ship, that were rumored to have carried women.

7 – Another popular pirate fact is that often pirates would target ports on strategic islands in the Caribbean and take then by siege, thus making them safe havens for other pirates.

8 – Pirates have been around since the times of the Egyptians with the most pirating occurring between the 1500 and 1720.

9 – As most pirate ships were stolen, a master carpenter was an essential crew member to condition the ship to make it suitable for pirate life, such as space for pirates to live and sleep as well as strengthened decks to sustain the cannons necessary for battle.
10 – And finally, and by no means least. Grog was pirates’ favorite alcoholic beverage. Grog was made from rum diluted with water or beer, served hot or cold. If supplies were handy, they might add sugar, lime juice or other spices to make it tasty.