An appropriate topic for our pirate ship blog category, Scurvy Pirate History is what “scurvy” actually means. Like many terms related to pirate-lore and traditions, the word scurvy does not refer to anything pleasant. 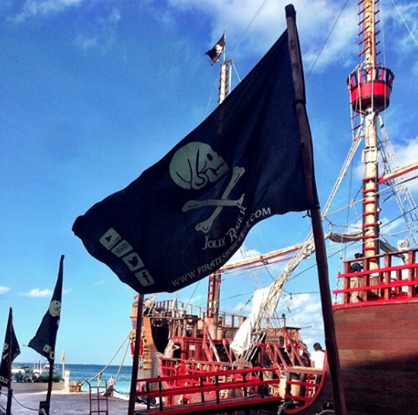 Scurvy is the name of a disease that was common among sailors and pirates during the fifteenth and sixteenth century, particularly when taking long transatlantic journeys during the Age of Discovery. The disease prevalent among pirates was caused by a deficiency of vitamin C thanks to limited supplies of fruit while at sea for long periods of time. According to Wikipedia, the name scurvy comes from the the latin word scorbutus, which also makes reference to ascorbic acid, which is the active part of vitamin C that has a positive effect on human health.

Pirates suffering from scurvy would feel lethargic and generally weary followed by the appearance of spots and lesions on the skin, weak gums and nose bleeds. The most common places for pirates to find scurvy spots would be on the legs and thighs. The latter stages of the disease saw pirates lose their teeth, suffer from jaundice and open wounds, then eventually death. Who’d want to be a pirate?

The reason that scurvy was so common among pirates was that they would spend a long time at sea, avoiding ports for fear of capture. Therefore, supplies of fresh fruit were low as fruit is perishable and did not sustain the long journeys. It wasn’t until much later that a direct link between the vitamin C found in fruit and scurvy was clearly identified, therefore, to many pirates, scurvy was like a plague inflicted by the devil.

Thanks to the influence of Hollywood and literature when we think about piracy we mostly picture the swashbuckling buccaneers of the Golden Age. Or, of…