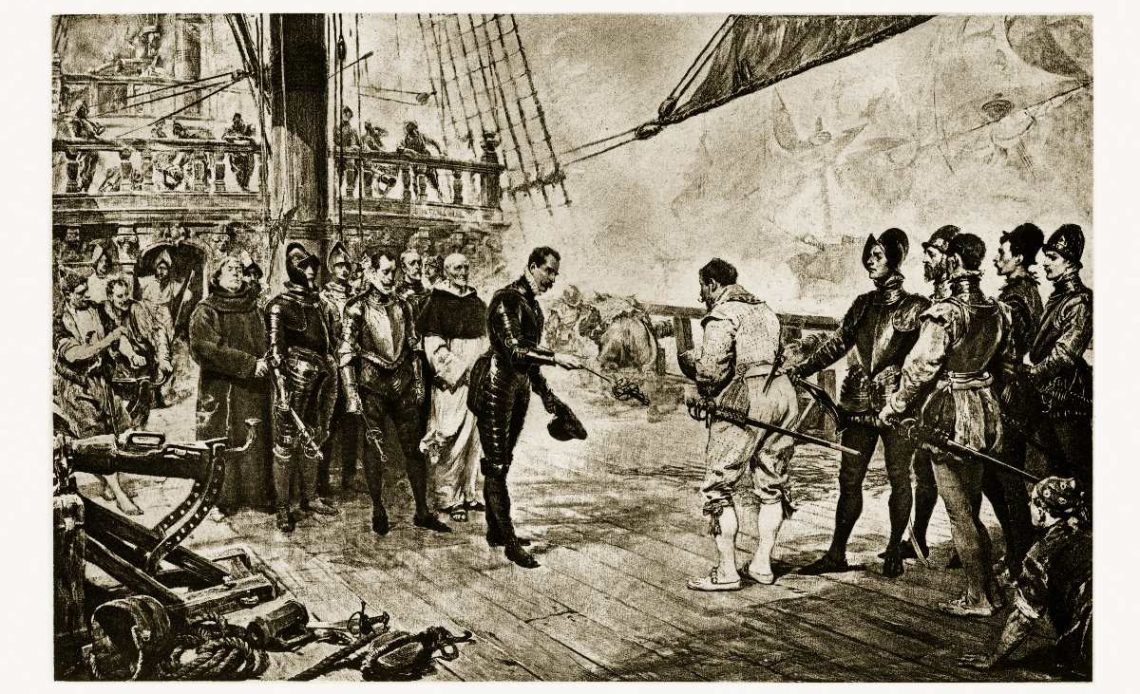 Sir Francis Drake was an English explorer, sea captain, privateer, slave trader, naval officer, and politician. He was born between 1540 and 1544 in Devonshire, England although his exact birthdate is not confirmed. The son of a tenant farmer on Lord Francis Russell’s estate (Earl of Bedford), Drake grew up in Plymouth and was raised by the Hawkins family. They were his relatives who worked as merchants and privateers that were often also known as pirates. For historical purposes, Drake is best recognized for his circumnavigation of the world in a single expedition during the years from 1577 to 1580. In fact, Drake became the first Englishman to navigate the Straits of Magellan, which is a sea route at the southern tip of South America that links the Atlantic and Pacific oceans. Read more to get to know Pirate Sir Francis Drake, one of the world’s most famous pirates.

As stated above, Sir Francis Drake is best known for circumnavigating Earth from 1577 to 1580 while attacking and seizing numerous Spanish ships along the way. At one point, he was credited for defending England when he successfully raided Spain’s harbor at Cádiz in 1587. Later in 1588, he also disrupted the Spanish Armada in the English Channel with fire ships. Many historians credit Drake as a person who played a major role in the destruction and defeat of the mighty Spanish Armada. As a result, his efforts helped propel England to create a grand empire in the New World. During his pirating days, at one point Drake captured a Spanish ship with 25,000 pesos of Peruvian gold near the city of Lima, Peru. The total stolen was valued at 37,000 ducats of Spanish money which is an astonishing $8.5 million dollars by today’s standards.

How Did Drake Defeat The Spanish?

During the late 1500’s, Spain was in control of the seas and a powerful force around the world. In April of 1587, the Queen of England authorized Francis Drake to make a preemptive strike against the Spanish. A giant Spanish invasion fleet was organized, but Sir Francis Drake executed a daring raid on the Armada’s supplies in the port of Cadiz which delayed the Armada’s departure until May 1588. Drake sailed from Plymouth with just a small fleet, but was able to surprise the Spanish armada at Cadiz and destroyed several dozen of their ships and over 10,000 tons of supplies. Later, the Spanish Armada tried to enlist the help of  the Spanish army, but English ships led by Drake attacked fiercely. During the attacks, the English had a little help from mother nature thanks to the fact that the wind blew the Spanish ships northwards.

As you can see, Sir Francis Drake lived an adventurous life filled with many impressive accomplishments. Firstly, Drake was the first Englishman to circumnavigate the globe. Secondly, he famously captured the treasure vessel nicknamed Cacafuego, which was officially known as Nuestra Señora de la Concepción, a 120-ton Spanish galleon. The massive ship sailed the Peru–Panama trading route during the 16th century and is considered Sir Francis Drake’s most famous prize. Also, he made one of the earliest English territorial claims in the New World. For example, he sailed to the West Indies and the coast of Florida where he mercilessly plundered Spanish ports. There, he was able to take Santiago in the Cape Verde Islands, Cartagena in Colombia, St. Augustine in Florida, and Santo Domingo in the Dominican Republic. Later, Sir Francis Drake was knighted aboard Golden Hind in 1581 by Queen Elizabeth I when he received the Golden Hind in Deptford. In the same year, he was appointed mayor of Plymouth.

If you want to live like a pirate for a day, why not book a trip to Cancun, Mexico? The top tourist destination has beautiful beaches, great weather, and delicious food. In addition, they also have a wonderful Jolly Roger pirate ship tour that allows visitors to live like a pirate for a day. Once aboard the authentic 17th century replica pirate ship, guests will be treated to hours of world class entertainment including live music, dancing and acrobatic fighting. There is even live cannon fire and a dramatic fireworks display during the evening. The drinks will be flowing as there is unlimited access to a premium open bar, and a delicious gourmet meal is served as well. Make sure to book your Jolly Roger pirate ship tour tickets in advance as space is limited on Cancun’s top tour.