Everyone knows that pirates were not the romantic heartthrobs that Orlando Bloom would have us believe, and were rather a bunch of ruthless mercenaries looking for gold and treasure and any cost (even human life). Nevertheless, you may be quite surprised to learn about just how many different weapons pirates had at their disposal. Pirate weapons included anything from cutlasses to axes to cannons to grenades leaving us with no doubt as to how buccaneers of the sixteenth and seventeenth century defeated their enemies. Take a look at some of the most popular pirate weapons below. 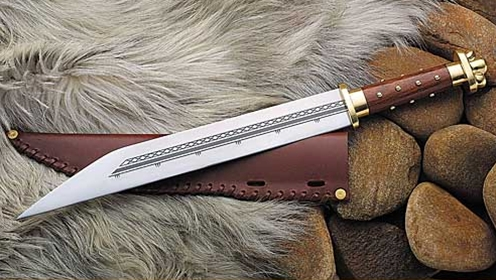 Knives and Cutlasses
The most obvious pirate weapons that come to mind when we think pirates are cutlasses and daggers. Cutlasses are a kind of short thick saber with a curved blade while daggers are smaller and could be used both at dinner and during battle! Learning to use a cutlass was easier than learning how to wield a sword, and so perhaps that is why cutlasses became so popular among pirates as weapons. Slightly bigger than a dagger, the dirk was also a favorite weapon, which commonly had double sharp edges. Pirate Firearms
With the invention of gunpowder, pistols and rifles were regularly used by pirates as weapons in their battles, making pirate warfare even more dangerous. The first grenades were also popular, made from hollow iron balls, like mini cannon balls, with a hole in the top and filled with gunpowder and shards of sharp items like shrapnel and nails. Cannon fire, of course, was one of the main artillery pirate weapons employed strategically in sea battles. Improvised Weapons
In addition to specific weaponry used by buccaneers in battle, like cutlasses, cannon fire and pistols, there were many items onboard ships that could be used by pirates to inflict harm on their enemies. Axes were often on hand upon pirate ships for cutting wood and were frequently brought to use during pirate warfare, as well as marlin spikes, which were long hand held tools made of iron frequently used by deckhands. Grappling hooks, which had four spikes on the end of a rope could also be used to injure the enemy from a distance.

What is clear, is that with so many torturous pirate weapons on hand, being a buccaneer was bloodthirsty work and not for the faint hearted.