The History of Pirate Flags 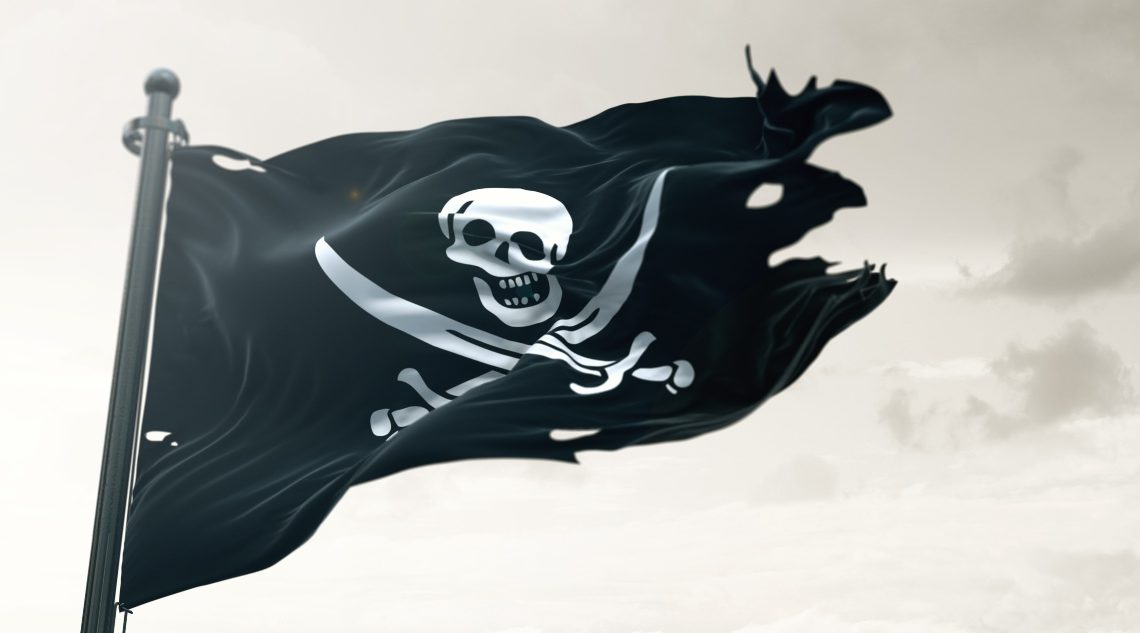 Did you know that flags are typically used to represent a people or a nation? They are also used in nautical and aerial communication as well.  During the latter part of the Golden Age of Piracy, where pirate flags were commonly referred to as the ‘Jolly Roger’, and would be raised to identify a ship or individual. One of the earliest descriptions of pirate flags is in the novel by Captain Charles Johnson that was published in 1724 known as ‘A General History of the Robberies and Murders of the most notorious Pyrates’. His identity has been the subject of scholarly debate. In fact, no record exists of a captain by that name, and “Captain Charles Johnson” has been used as a pen name for a London writer-publisher. Some scholars have suggested that the author was actually Daniel Defoe, but this is disputed.Read more below to learn about the history of pirate flags.

To start with, the origin of the pirate flag design may have originated from the Muslim Black Standard used by Barbary pirates in North Africa. Pirates often wanted a flag that was unique to themselves although the most common background of a pirate’s flag was black or red. In general, the images on the pirate flags were dreadful images designed to invoke fear in their enemies. While many pirates flew plain black or red flags, some captains began to embellish their flags with personalized symbols representing violence, death, or the devil. These objects on the flag were usually white, but red was often used as well. Since the Golden Age of Piracy ended in 1720, pirates have captured the public’s imagination in many ways. The most famous pirate flag in existence is the Jolly Roger. The phrase no quarter was generally used during military conflict to let combatants know that they would not be taken prisoner, but killed.

Pirate flags were considered personal symbols and unique to each pirate capitan. In fact, pirates often designed their own flags as a way of conveying something about themselves. In the earliest history of piracy, pirate ships usually flew simple red flags on their ships. Red flags that contained a design or not were symbols that the  pirate ship would attack and offer no mercy to victims. Later, a black flag with the image of a skull and crossbones was designed to warn of death or danger. It was subsequently used in pirate flags on pirate ships. Traditionally, a flying black flag would indicate that the vessel was a pirate ship and would offer no quarter if the ship they were about to attack would surrender immediately.  In modern times, the symbol is often used on containers holding poisonous substances.

During the Golden Age around the 1650s and the 1730s, piracy was subdivided into three periods. Firstly, the Buccaneering Period, was a time when French seamen attacked Spanish colonies and shipping vessels in the Caribbean and eastern Pacific. Next, the Pirate Round was a time period where mainly English pirates targeted Muslim and East India Company shipping in the Indian Ocean and the Red Sea. Lastly, the Post-Spanish Succession Period, was when Anglo-American sailors and privateers that were left unemployed by the end of the War of the Spanish Succession turned to piracy and captured ships and bounty in the Caribbean, the Indian Ocean, the North American eastern seaboard, and the West African coast.

As far as famous pirates go, many people consider the most famous pirate of all time to be Blackbeard. Born in England in 1680 as Edward Teach, Blackbeard was a notorious English pirate in the Caribbean Sea during the early 18th century whose life is shrouded in mystery. In fact, much of what is known about him and other pirates from the Golden Age of Piracy came from the 1724 book, “A General History of the Pyrates. In terms of the most famous female pirate, Anne Bonny tops the list. Anne Bonny was a member of Calico Jack’s crew, along with fellow female pirate Mary Read. Legend says that the two women fought with more skill than any man on board the ship.

We hope you enjoyed this article about the history of pirate flags. If you want to immerse yourself with an authentic pirate experience, check out the Jolly Roger pirate ship adventure in Cancun, Mexico. One of Cancun’s top tours, the Jolly Roger offers guests a unique experience cruising the Caribbean Sea on an authentic 17th century replica pirate ship. Guests will enjoy world class entertainment including singing, dancing, and acrobatic fighting, too. In addition, there is a delicious gourmet meal served and guests can select from 13 main course options. Likewise, a premium open bar is included with drinks served by your very own pirate waiter. Space is limited, so make sure to reserve your tickets on the Jolly Roger pirate ship soon. It’s a great way to step back in time and enjoy a day of excitement, adventure, and delicious food and drinks!