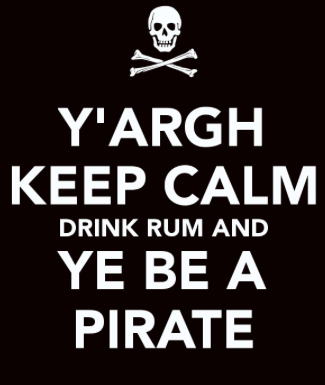 Here are some more Cancun Jolly Roger Pirate Ship lingo tips to get you talking like a pirate:

Cackle Fruit – pirate for “eggs.”
“I be gettin’ me some cackle fruit for breakfast”

Carouser – A pirate party-animal who likes rowdy drinking.
“He be a carouser, drinking all the grog.”

Cat o’nine tails – Pirate slang for a whip used for flogging which has many lashes.
“Cat o’ nine tails for anyone who disobeys me orders, argghh!”

Clap o’ Thunder – A really strong alcoholic beverage.
“Aye, it be past 11am, time for a clap o thunder.”

Chase – Pirate for “following” or “pursuing” a ship
“We got a chase on, mateys! Follow that ship!”

Come About – To turn a pirate ship around to face the wind fully or to turn and face an enemy.
“Come about boys, we got a battle to fight!”

Dead Men Tell No Tales – Pirate lore: it’s better to leave no survivors so they can’t get you into trouble.
“Send em all to Davy Jones’ locker, after all, dead me tell no tales.”

Dog – A light pirate insult, could even be used between friends.
“Aye, matey, you be a dog!”

Doubloon – a valuable Spanish gold coin
“X marks the spot where there be a treasure chest full of doubloons for the takin’ mateys.”