Get to Know Pirate Anne Bonny 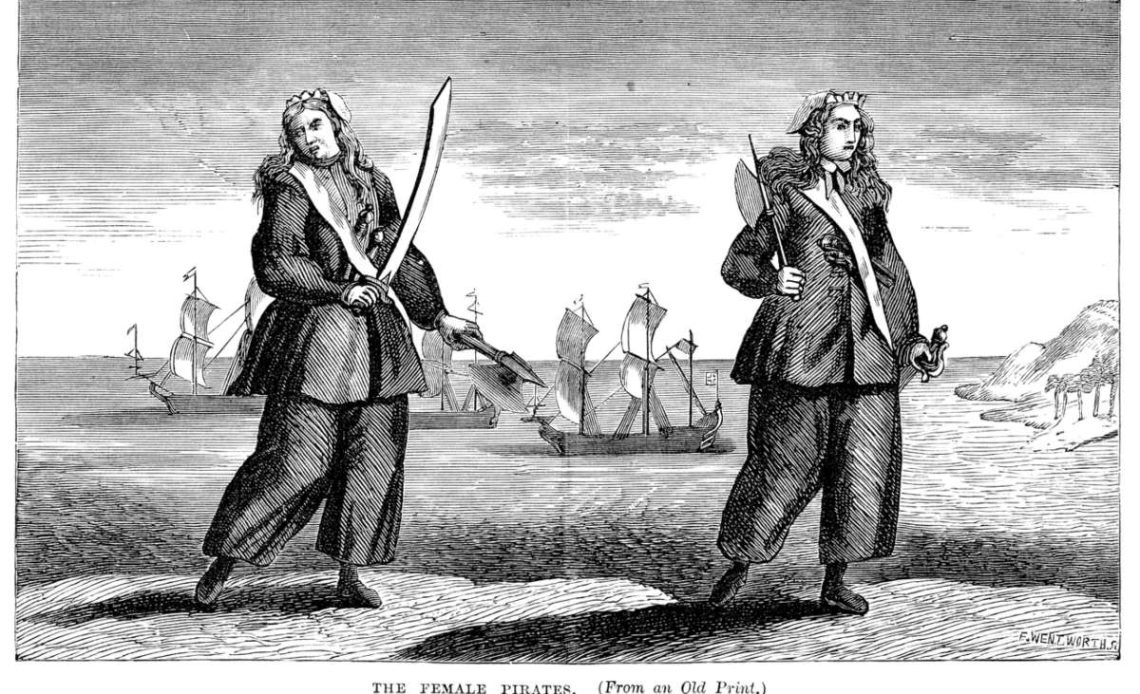 Anne Bonny was one of the few pirates that was a woman. She was an Irish pirate that sailed the Caribbean Sea during the Golden Age of Piracy. She is actually one of the most famous women pirates ever. Captain Charles Johnson was the author of “A General History of the Pyrates”, and Anne Bonny’s life is known from records that Captain Charles Johnson wrote. Her exact birthdate is still unknown, but it is estimated that she was born approximately in the 1700’s in County Cork, Ireland. Her mother was named Mary Brennan who was a servant girl who became pregnant by William Cormac, a lawyer and her employer. He left Ireland and headed to London where he dressed Anne as a boy, so she could be trained to be a clerk for a lawyer. Keep reading below to get to know pirate Anne Bonny.

As stated above, William Cormac was Anne Bonny’s father. When he left Ireland and headed to London, he brought Anne with him, but dressed her as a boy and called her “Andy”. His plan was to bring her up as a lawyer’s clerk. He moved later to the Province of Carolina to be with Mary Brennan, who was Anne’s mother. He gave up the “Mc” in his family name so he could blend in easily in his home in Charleston, South Carolina. He saved money and was able to purchase a plantation outside of town. Unfortunately, Anne’s mother passed away when she was only twelve years old. Although her father worked in the law industry, he wasn’t very successful. Later on, he started to be involved in merchant business where he was able to gain substantial fortune.

Anne as a Younger Adult

History says that young Anne Bonny was a very pretty girl. She had striking bright red hair that was pleasing to the eye. However, she also had a fiery temper to go with her red hair, too. When she was thirteen years old, she supposedly stabbed a servant girl with a knife in a fit of rage. Later, she married James Bonny, a poor sailor and pirate. He had plans of taking over his father-in-law’s estate, but Anne’s father didn’t like James, and evicted her from his home for marrying James for a punishment. In retaliation, Anne set her father’s plantation on fire. In an attempt to start their life together without interference from her father, Anne and her husband moved to Nassau where they lived from 1714 through 1718.

In the summer of 1718, Governor Woodes Rogers came to Nassau, and James Bonny started working for him as an informant. He would report all pirate activity that was occurring in the area, and Governor Rogers would arrest the pirates. Anne didn’t agree with her husband working for the Governor and became very unhappy in her marriage. Later, she started socializing with pirates in local taverns and met John “Calico Jack” Rackham who was captain of the Revenge pirate sloop. Immediately, she became his lover. Rackham was so in love with Anne that he offered her husband money to divorce her, but her husband refused. Anne and Rackham left together, and she became a pirate crew member disguised as a man. She became pregnant and they docked the ship in Cuba so she could give birth to their son. Afterwards they lived at sea as a married couple.

Towards the end of their career as pirates, Rackham, Anne, and Mary Read (another lady pirate) spend several years in the waters of Jamaica. There, they successfully captured many small ships and acquired many treasures. Pirate Anne even fought along the men and was recognized for her strength and agility. Governor Rogers named her in a “Wanted Pirates” circular that was published in a local newspaper. She never commanded any ship, but worked as a pirate crew member for several years. In 1720, Rackham and Anne’s ship was attacked by a “King’s Ship”. However, there wasn’t a big battle  as many of Rackham’s crew were too drunk to put up a  fight. Rackham and Anne fought bravely, but were taken prisoner where they were sentenced to be hanged by Governor Lawes.

Anne and Bonny, both female pirates, begged for mercy as they were both pregnant, and they were granted that until they gave birth. Anne was later released, and there is no evidence if she was executed.

Would you like to experience the pirate life even for a day? If so, then make sure you go on a tour on the Jolly Roger Pirate Ship in Cancun. It is a top tour in Cancun that fills up quickly. The Jolly Roger pirate ship is a day full of world class entertainment, exciting acrobatic fighting, and loads of fun. Guests will love having their very own pirate waiter bringing them cocktails, wine, and beer from the unlimited premium open bar. In addition to drinks, a delicious gourmet meal is also served. Get ready to sail on the Caribbean Sea and live like a pirate for a day on the Jolly Roger! Make sure to reserve your tickets in advance as space is limited.