Vikings were arguably the original pirates even if they were generally land-living, and attacked villages and settlements as well as ships. For hundreds of years they made a huge impact on the lives and minds of the Europeans they haunted, and their success as pirates and raiders rested largely on the superiority of their equipment and their ships. 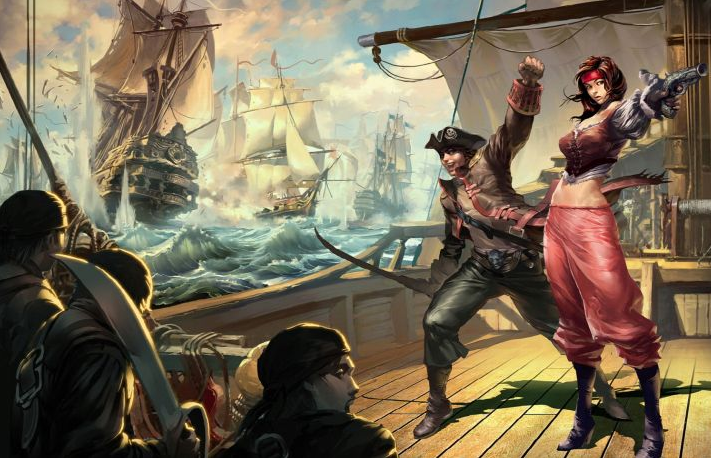 Vikings were consummate shipbuilders and sailors; hailing from Denmark, Sweden, Finland and Norway they came from countries with fishing industries in full bloom that were riddled with inlets and fjords. Water, and the sea represented a huge part of their lives. Though they built many different boats the iconic Viking vessel, the one that most people picture, is the Dreki.

This narrow decked, shallow-draft ship had one central mast, a large square sail, and a high, tapered stem on which removable figure heads could be placed. These carvings, generally animal heads, were seen to protect the ship from the dangers of the sea, but were removed when they returned so as not to frighten off the guardian spirits of their homes.

These boats had 60 oars, but there were no galley slaves; the warriors were expected to be fit enough to row and then fight at the end of the journey. In order to conserve space they fastened their shields to the railings of the ship which also served the purpose of adding extra protection from enemy fire.

Once in battle the Vikings had a few options; when boarding other ships short swords or medium sized axes designed for close combat were used. On land, many would favour great broad axes or swords which were often noted to be capable of cleaving through a man in one swing if the warrior was strong enough! But the feat for which many Vikings were feared was their capability and tendency to catch spears mid-flight and return them with truly frightening accuracy. Vikings were, if you like, the SAS of the pre-medieval world; they were a force to be reckoned with and this was in no small part due to the equipment they had.

Halloween is just around the corner and there are sure to be a number of little pirate wannabes out there, eager to look like…