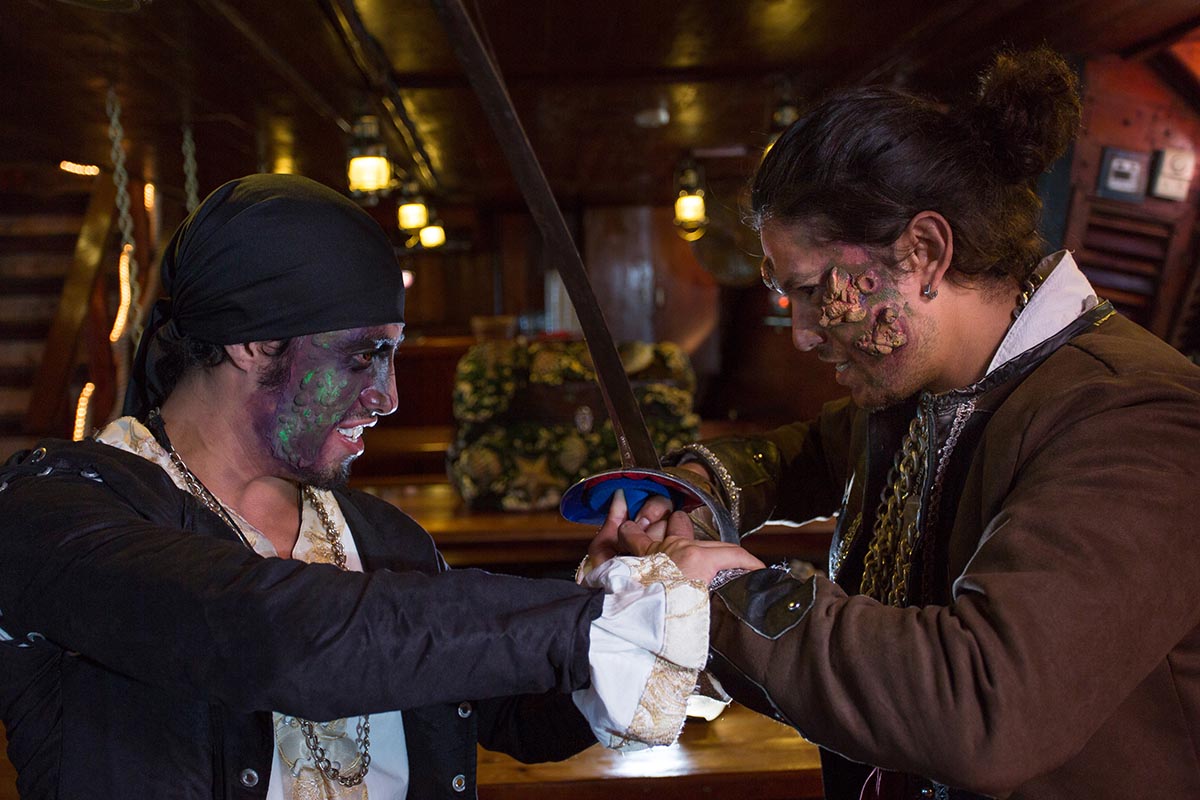 Are you a pirate aficionado and want to learn more about these mysterious and bigger than life adventurers? Centuries ago during the Golden Age of Piracy between the 16th and early 18th centuries, any pirate related news was typically conveyed through word of mouth. In time, novelists began documenting pirate escapades with the written word, and literary works started appearing that detailed some of the most famous pirate’s lives and their adventures. Our top  6 books about pirates are based on historically accurate records and real life experiences with pirates. Many of these books also inspired famous pirate myths and stereotypes that still persist today.

Here are our top 6 pirate books you should check out:

#1: A General History of the Pyrates

“A General History of the Pyrates” is recognized as the book that introduced civilian society to pirates with detailed descriptions of their adventures and daily life.  This book is also regarded as the first literary work to create interest about the pirate lifestyle. With in-depth details about pirates that roamed the Caribbean seas in the late 17th and early 18th century, this book continues to be a favorite today. It not only defined our modern opinion of pirates, but it also served as a starting block for other authors who consequently earned a living writing pirate novels.  A General History of the Pyrates offered up an extremely detailed look at what life was like for a pirate on the open sea during the Golden Age of Piracy, including references to pirates without legs, eye patches, buried treasures, and elaborate “Jolly Roger” flags that we still associate with pirates today. This book can be a bit hard to read as it was written using an authentic old version of English that includes complicated sentence structures and words not commonly used in the English language today.

#2 Under the Black Flag: The Romance and the Reality of Life Among the Pirates

If you really want to understand what a regular day was like for a real pirate, this is the book for you. While the history of pirates has been romanticized by myths, legends and pirate images, this book was written by David Cordingly who worked as the head of exhibitions at England’s National Maritime Museum. His book focused on true historical events associated with both pirates and the men who tried to stop them and confiscate the gold and treasure they had obtained along the way in their escapades. There are many historical records taken from original documents, this book also covers modern pirate myths and separates fact from fiction. This book is ideal for modern readers because it is easy to read and includes interesting pictures, maps and historical documents.

#3: The Republic of Pirates: Being the True and Surprising Story of the Caribbean Pirates and the Man Who Brought Them Down

A modern book written by author Colin Woodard, this novel closely details the entire Golden Age of Piracy and focuses on famous pirate captains including “Black Sam” Bellamy and Edward “Blackbeard” Teach. Bellamy and Teach actually worked together by joining forces and forming the infamous Flying Gang pirate entourage that ran a terror campaign throughout the Caribbean and Atlantic for years. This book details both the origins and the exploits of this infamous group, and also explains their pirate haven where pirate outcasts could find sanctuary from government prosecution. The author used information obtained from numerous historical documents, testimonies, court files, and scribes that he collected over the years. As a result, this historical book also humanized pirates, and depicted them as regular people living extraordinary lives.

#4: The Pirate Hunter: The True Story of Captain Kidd

This book highlights the life of a famous pirate hunter, Captain Kidd, who was a Scottish naval captain who did his best to put an end to piracy on the open seas.  However, he was actually executed for piracy after returning from a voyage to the Indian Ocean. Some modern historians believe that he was wrongly convicted and put to death.  While there is not much known about many of the pirate hunters,  this book used information from historical documents, testimonials, court files and other sources to create a captivating novel that will invite the reader to imagine what life was like as a pirate hunter in the late 17th century. There are detailed descriptions of the sea lifestyle, East India Company captains, pirates and why pirates became so dangerous during this time.  If you want to learn more about pirate hunters that were on the trail on some of the most dangerous pirates at the time, this book will be a perfect choice.

#5: The Whydah: A Pirate Ship Feared, Wrecked, and Found

An authentic pirate ship wreck that was discovered under the waves of Caribbean inspired The Whydah book. The Whydah was a pirate ship commanded by the eagerly fearless pirate Black Sam Bellamy, also known as the Prince of Pirates or Robin Hood of the Seas. Bellamy terrorized the Atlantic in the years 1716 and 1717. This book offers an insider’s view into Bellamy’s life and adventures. Bellamy and his crew managed to amass a great fortune in a short period of time, and his sunken ship was discovered centuries later in 1984. Author Martin W. Sandler was able to obtain comprehensive information and material from the shipwreck that helped make his book another top pirate book choice. It focuses on the harsh realities of pirate life, as well exposing pirate myths and stereotypes.

#6: Pirate Hunter of the Caribbean: The Adventurous Life of Captain Woodes Rogers

Our last choice for a top pirate book is Pirate Hunter of the Caribbean which is focused more on the harsh lives of people who were tasked to hunt pirates across the Caribbean and Atlantic as opposed to pirates themselves. This book provides great details of exploits of Captain Woodes Rogers who was a professional pirate hunter.  This novel touches on various subjects connected to pirate life including the general history of that time period, as well as political and economic environments that contributed to the rise of piracy.

We hope you enjoyed this list of the top 6 pirate books. Which one will you read first?