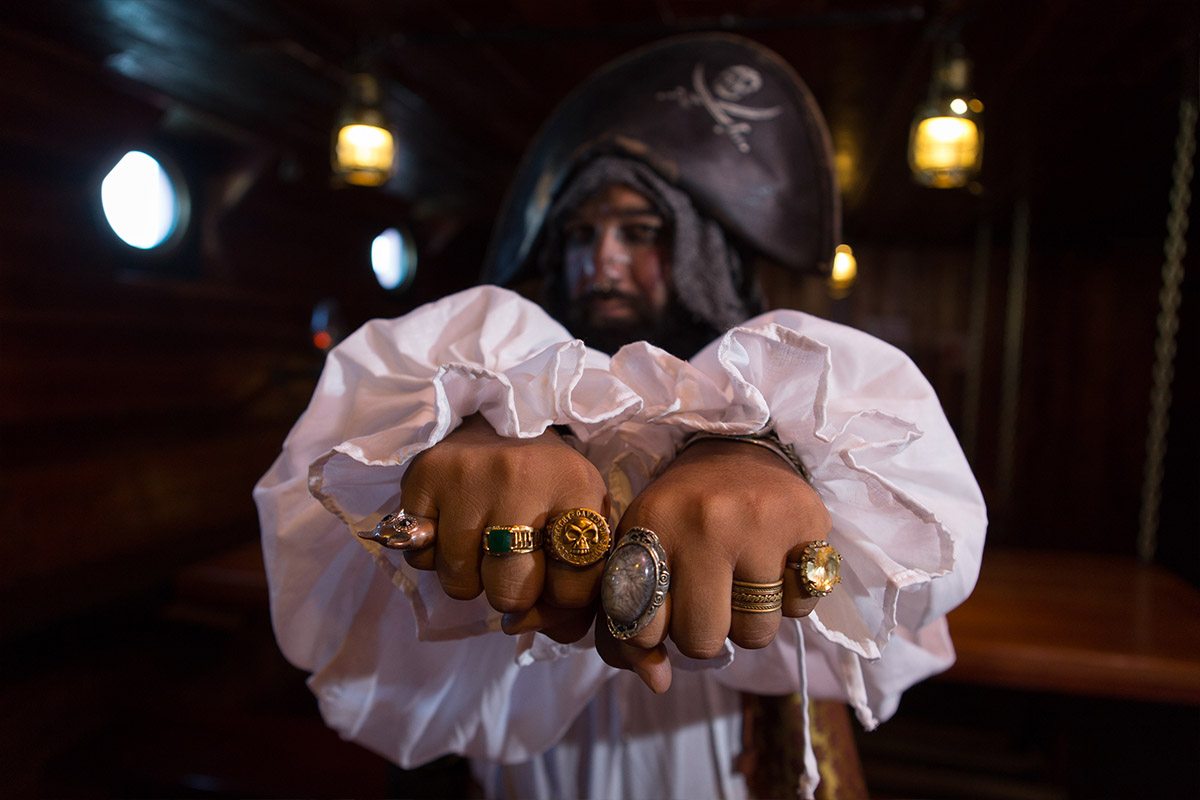 Dressing up as a pirate has become a popular if not fashionable costume for parties and celebrations. Let’s take a look at where staple items such as ripped shirts, golden earrings and a wooden leg originated!

Many pirates were recruited from jobless seamen who found themselves destitute between times of war. As such, the clothes of a sailor or ´slops´ would transfer for use in the adventures of a pirate. This would include some hallmark items like breeches, caps, and linen shirts. Pirate clothing worn on deck could be a mismatch of materials and colors depending on the wealth of an individual and what had been pilfered. The stereotype of a shredded shirt comes from the physical work of a pirate on deck being extremely demanding which often led to holes, rips and tears accumulated through the exertion. In fact, the attire of a seaman whilst aboard a ship by necessity had to be tight. Billowing shirts that could dangerously get caught when climbing the rigging were best left for dry land!

Bandanas were worn as a tactic to keep the sweat from the eyes of a laboring deckhand and interestingly, apart from indicating wealth, gold hoop earrings also had the practical use of easing sea sickness due to the pressure they applied to earlobes.

Pirates are somewhat synonymous with fighting and indeed some of the classic elements of a pirate´s appearance resulted from the injuries they endured. Patches would be worn by those unfortunate enough to lose an eye during a brawl. A wooden leg might be the last option for a pirate who lost a limb or needed an amputation following a pirate attack, or indeed a hook to replace a lost hand with something more vicious.

Go for the captain look

As for the Captain, as he prowled the decks giving out orders and plotting the next move, his apparel communicated messages of savagery and riches. A typical Pirate Captain might model breeches and a waistcoat of deep crimson color, tailored from velvet. The famous tri-cornered hat garnished with the feather of some exotic bird met on a faraway travel. A sash worn around the waist, fashioned from a luxurious material such as silk and his outfit adorned with gold jewelry. And of course, a statement leather belt made heavy by the dangerous collection of a sharp cutlass, dagger and pistol.