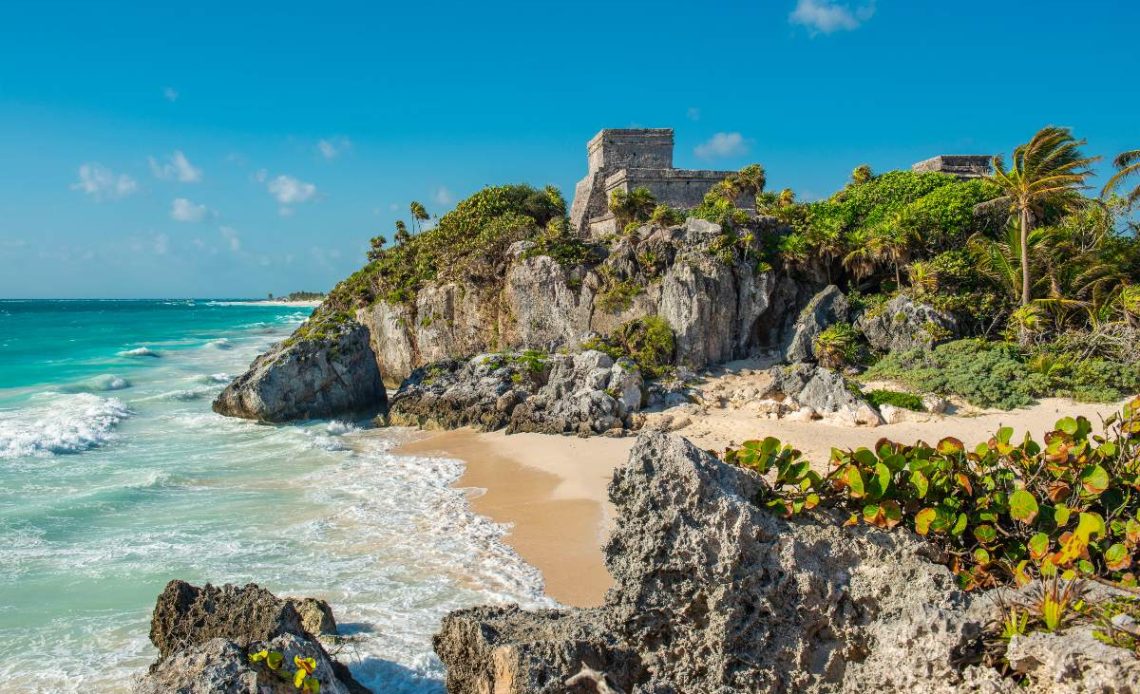 If you want to take a summer vacation to Mexico, why not head to beautiful Cancun in the Riviera Maya? Located on the Yucatan Peninsula, the region is home to miles of white, sandy beaches and sparkling Caribbean Sea waters. The area is one of the most popular tourist destinations in the world thanks to the year long warm climate that is ideal for outdoor activities. Top activities include snorkeling, scuba diving, kayaking, hiking, and more. Also, there are swimming holes to explore known as cenotes that formed where limestone is exposed. Also, no trip to Cancun is complete without visiting the local Mayan ruins in the area, that are part of Mexico’s rich heritage and culture; there are multiple archaeological sites near Cancun including Chichen Itza, Cobá Ruins, Tulum Ruins, and El Rey.

Keep reading more about the top 4 Mayan ruins to visit near Cancun.

For starters, many people recognize Chichén Itzá as one of the most famous Mayan ruins in the country. To get there, it takes about 2 hours to drive from Cancun. There are many tour operators that pick up visitors in Cancun, and return them after the day trip exploring the ruins. The main highlight is the famous El Castillo pyramid which is one of the New Seven Wonders of the World. At one point, Chichén Itzá was the most populous city in the entire Yucatan Peninsula. Impressive architecture and ancient secrets of the Mayans have been uncovered during in-depth site excavations. The main structure has nine platforms, a single stairway, and a temple containing human remains. In addition, a jade-studded jaguar throne and Maya sculpture of an abstract male figure reclining and holding a bowl used as a receptacle for sacrifices known as Chac Mool was discovered at the site.

Secondly, the Cobá Ruins are a fun place to explore if you go on vacation in Cancun. Located 2 hours southwest of Cancun, many of Cobá’s buildings were constructed in the middle and late Classic period from about 500 to 900 AD. In fact, some of the dated hieroglyphic inscriptions have been estimated to be as old as the 7th century. Cobá was once an urban hub of many settlements that were joined together by roads called sacbee which are unique to this Mayan city. The roads range in width from 10 to 30 feet and were built by the Maya for commerce. The longest road is 62 km/100 km long, and fifty others have been discovered. The main tower is known as Nohoch Mul and measures 42mt tall (137ft), and it’s one of the few high pyramids left that visitors can still climb.

Thirdly, the Tulum ruins are another beautiful archaeological site to explore in the Riviera Maya. Tulum is a resort town on the Caribbean coast located around 130 km south of Cancun. The Tulum ruins are estimated to have been constructed sometime between the years 1200 AD and 1450 AD. The 13th-century, walled Mayan archaeological site at Tulum National Park overlooks the Caribbean Sea so visitors will enjoy amazing views while they explore the ruins. There, the top landmarks include the clifftop watchtower El Castillo, and the Templo de las Pinturas which contains a partially restored mural. Make sure to read the signs at each site to learn about the site’s history or you can hire a guide to escort you around the ruins for around $30 dollars.

Last but not least, there are actually ruins located within the hotel zone of Cancun. Known as the El Rey ruins, they are located just 2 miles from Cancun’s popular Playa Delfines. Archeologists have concluded that many of the Mayan people inhabited not only Mexico, but also parts of Guatemala, El Salvador, Belize, and Honduras. As far back as 1800 BC, the first inhabitants were living in the area. Later, the site was abandoned when the Spanish arrived in the 1700’s. Today, the El Rey Ruins have 47 stone structures that are still in decent shape. Make sure to wear comfortable clothes and shoes when you visit so you can climb the structures as you explore the site.

During your next trip to Cancun, make sure to visit Mayan ruins so you can learn more about the country’s rich heritage. If you’re looking for another fun tour to attend, check out the Jolly Roger pirate show adventure. One of Cancun’s top tours, the Jolly Roger pirate ship is a 17th century replica that always impresses visitors. Both day and evening tours are available, and guests will be wowed by the world class entertainment that includes acrobatic fighting, a gourmet dinner, premium open bar, and live music and dancing. Also, Jolly Roger pirate ship tours can be combined with visits to local ruins as well. Check their website to decide which tour best suits your needs. Remember, contact the Jolly Roger today to book your pirate ship tickets and make sure to visit local Mayan ruins, too. Cancun is ready for you to visit!