For all the differences in size, style, and use of certain pirate ships, you can be sure that they generally had one thing in common; pirate ships were not bought or sold as pirate ships, but stolen and reconditioned. This is why having a master carpenter as part of a pirate crew was such an important thing; the work they did ranged from repairs, to practical modifications to provide more sleeping quarters, or even upgrades to the ship’s weaponry. 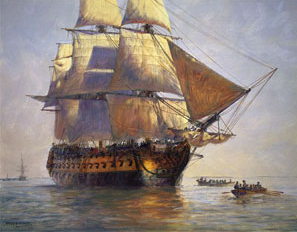 Take a look at the different varieties of potential pirate ships below:

Sloops were at their most popular during the 16th and 17th centuries, more commonly known as the Golden Age of piracy, where they were used for traversing the Atlantic and Caribbean waters. They were commonly built in the Caribbean and were fairly easy to adapt to the needs of piracy. The large bowsprit of these ships meant that there was a potential for increased canvas, and therefore better manoeuvrability. The biggest advantage gained by using a sloop was the speed at which they could move, and the shallow draft that allowed them to escape through shallower waters. The best tactics for this kind of ship was to attack and retreat again quickly; making good use of that top speed of 10 knots.

Another choice pirate ship in the Caribbean and Atlantic was the two-masted Schooner; this ship was quick and manoeuvrable like the sloop, but was smaller and narrower with an even shallower draft though it retained the capacity for a large number of guns and canons. The upside to this was that it could evade larger ships and armies in shallow, narrow estuaries quite easily. The downside to this was that it wasn’t able to hold quite so many men, or so much loot, which was a big concern for ambitious pirate ships.

For particularly aggressive pirate ships, brigantines were favoured for long battles as they could hold over 100 men, generally had oars to be used during low winds, and benefited from a shallow-draft. They were popular in the Mediterranean thanks to the manoeuvrability they afforded.

Square-rigged ships were generally merchant vessels as they were large, could hold many men and goods, and were perfect for long voyages. They were easily identifiable by their three masts and square sails, but were slow and lacked in agility which made them perfect targets for the smaller, quicker ships that pirates favoured. If they were taken on by pirates at all they would have been part of a fleet, used for carrying the loot and more likely than not protected by smaller, quicker ships.

These flat-bottomed, wide, strong boats were not very fast and could weigh over 300 tons, but they benefited from plenty of space for guns, canons, and cargo. Pirates were more likely to simply take valuables and leave a Fleut behind rather than adapting it as a pirate ship.

Galleons were large cumbersome ships with space for plenty of loot, 200 men, and over 70 canons. They were able to defend themselves, but were slow and couldn’t manoeuvre easily which meant that this Spanish designed ship was a perfect target for pirates.

Henry Every was a notorious  pirate with many different aliases. These aliases include Long Ben, Benjamin Bridgeman, and John Avery. Henry Every was very…