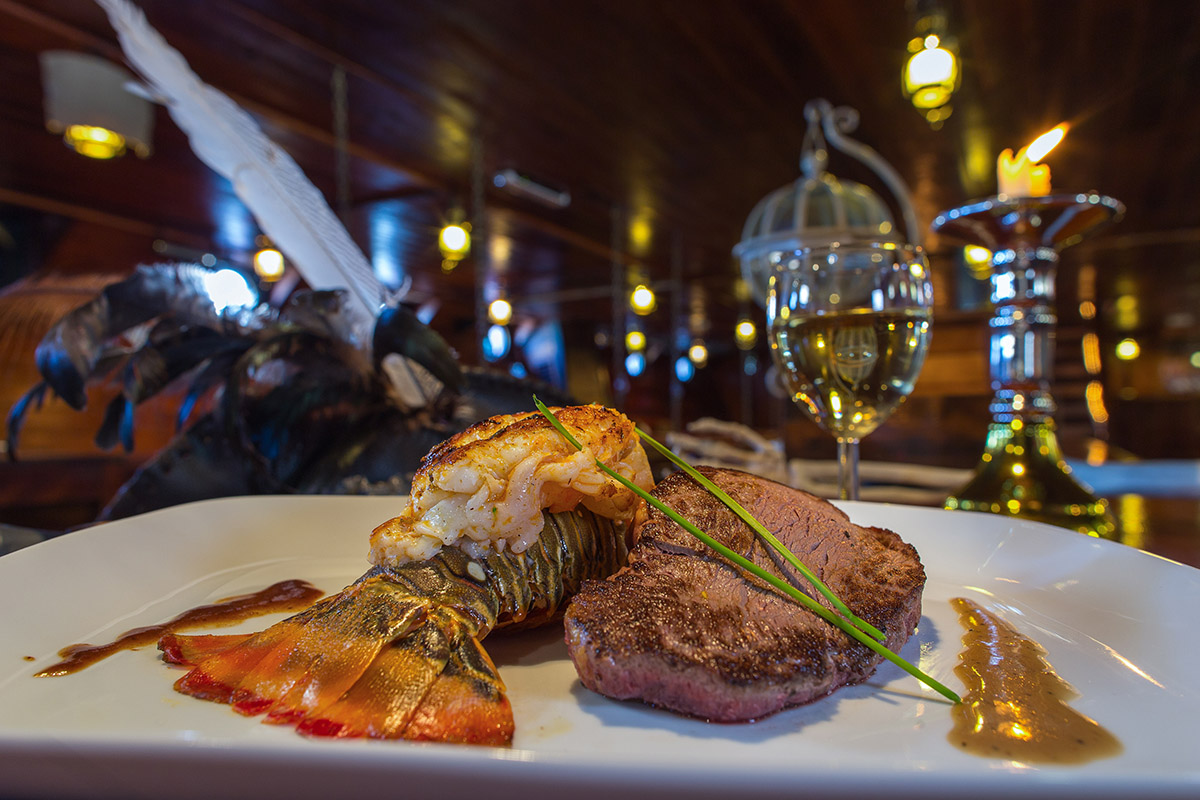 During the 17th century, the Golden Age of Piracy, which is considered the height of piracy, occurred. At that time, there were thousands of pirates that were at sea actively attacking ships, stealing goods, and taking prisoners. Ships would often be at sea for weeks and months on end. As a result, it was different to have a healthy diet as fresh foods such as fruits, vegetables, meats, and dairy would quickly spoil. Instead, the main staples in a pirates diet included dried foods including beans, salted meats, sea biscuits and pickled vegetables and fruits. Since fresh fruits and vegetables would expire very quickly, malnutrition and illnesses caused by lack of vitamin C were very common among pirates. If you’d like to learn more about pirate food and drink, keep reading below.

What Did Pirates Eat?

For starters, most pirates were not able to eat healthy and balanced meals due to the circumstances. As fresh foods didn’t last very long while at sea, the majority of their vegetables and meat had to be pickled or salted to preserve the food which makes them less healthy. In addition, other common foods consumed by pirates were biscuits, dried beans and salted beef jerky. Despite being at sea, pirates were not known to eat fish because fishing was too time consuming and they weren’t able to catch enough fish to make it worth it. Instead, dried plants, beans, and legumes were popular foods that provide fiber for pirates at sea. Since fresh fruits and vegetables would expire quickly at sea, pirates would commonly become sick with scurvy which is an illness caused by a vitamin C deficiency. If available, lime juice was consumed as a source of vitamin C.

As far as common pirate drinks, fresh and clean drinking water was very difficult to obtain during the Golden Age of Piracy. In fact, clean drinking water was hard to find on dry land as well.  For pirates at sea, it was virtually impossible to transport and maintain an adequate supply of fresh drinking water while they were traveling. Therefore, many seamen had to drink other liquids such as grog, beer or ale because water was not always available. In addition, some pirate ships would keep cows and goats on board, so the pirates would have access to fresh milk when food was starting to run out. If needed, pirates would eventually butcher the cows and chickens for meat as well. In terms of stronger drinks, pirates also liked to drink rum, gin, and wine, too.

As you can imagine, living the pirate life on board a pirate ship was quite difficult. Many pirates would either become ill or die during a battle at sea. Some pirates were beaten to death on board during a fight with crew members. It is estimated that the average life expectancy for pirates was only two years. Many times, their families never even knew what had happened to them. As far hygiene and staying clear, bathing didn’t involve freshwater because it was used for cooking. Therefore, pirates would rarely bathe and when they did, they would usually just jump in the ocean to rinse off a bit. Likewise, pirates did not brush their teeth as the toothbrush was not invented until centuries later in 1938. When pirates wanted to clean their teeth, they would use a device called a  “chew stick” which was not very effective in keeping teeth clean and free of plaque.

In 2022, Pirates continue to attract interest today. If you’d like to live like a pirate for the day and eat a gorumert version of pirate food, you should book the Jolly Roger pirate ship tour. Based in the idyllic beach destination of Cancun, Mexico. The Jolly Roger pirate ship tour is one of Cancun’s top tours. Set aboard an authentic 17th century replica pirate ship, guests get to cruise through the Caribbean Sea as they enjoy live entertainment that includes singing, dancing, acrobatic fighting, and more. In addition, there is a delicious gourmet meal that will rival the best restaurants in town. Plus, a premium open bar is available where guests are served by their very own pirate waiter. Tours can be combined with visits to local Mayan ruins such as Chichén Itzá and more. Are you ready to spend a fun day at sea with the Jolly Roger pirate crew?